How to cover a bra

Covering a bra with cloth is not too difficult. Here I am demonstrating it step by step.
Unfortunately, due to the velvet and the photos taken directly from above, some details are not so clearly visible.

Take a normal stiff bra and a piece of cloth.
I prefer a somewhat elastic material, in this case a piece of elastic velvet. 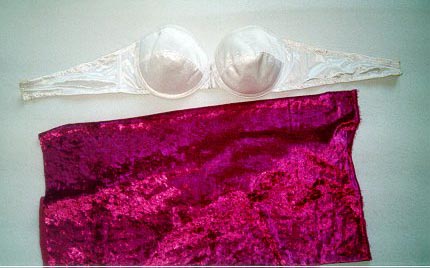 I place the cloth loosely around the top edge of the bra and pin it tight so that no waves appear on the upper part of the cups. Here I was able to cover the side parts at the same time, you can also do this in a second step. 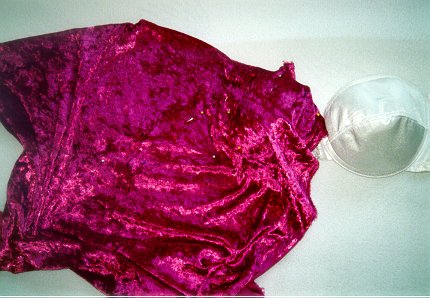 Inside, it looks this. 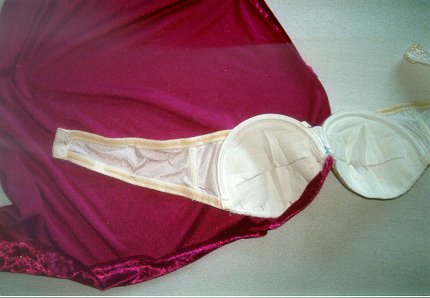 Now you cut away the superfluous cloth, leaving a bit for the seam, fold the cloth over and pin it tight. On the photo there seems to be a kind of "tail", but it is only a part of the cloth that I had not folded over to the inside yet.
Along the "curved" edges (along the cups, for example), you have to cut into the cloth before folding it over and to place the parts on top of each other.

Here it is clearer: the cup is almost covered, we just have to make a nice dart on the lower part to get rid of superflous cloth. Here I made a dart from the tip of one cup in the middle towards the other cup.
The cloth is placed loosely on the bra, it is not pulled or extended.
Try again and again to make sure that the cup does not get smaller.

The dart is "closed". I fixed the cloth folded over on the inside. Due to the velvet, the stitches are invisible.

Now you do the same on the other side: place cloth on bra, pin tight, cut away what is too much.

Fold everything over, pin it tight, and here you can see the superfluous cloth along the lower edge of the cup.
Now: place the dart exactly as the one on the other side.
Then you have to make a seam in the middle between the two cups which is as hidden as possible. 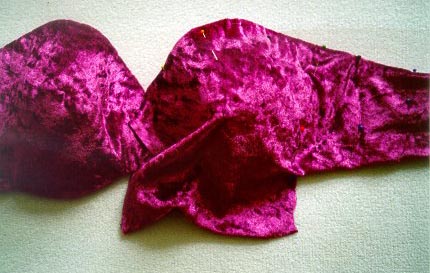 And this was the complete set: belt and bra including strap.
I wish I knew where it ended up..... *sigh*

I hope it became clear: covering a bra is really very easy! ;-))